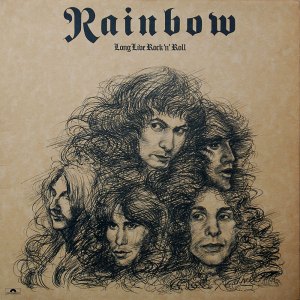 Rainbow were keen to record in Munich again at Musicland Studios, following their previous two studio albums. It was, however, booked up for months in advance during 1977, so Cozy Powell was sent on a mission to seek out alternatives. He liked the drum sound apparently at Château d’Herouville, about 30 miles outside of Paris. It had been used years earlier by Elton John, The Rolling Stones and other major groups.

Recording commenced in the May of 1977, with ironically Tony Carey and Jimmy Bain initially rehired to commence keyboard and bass duties. The beautiful weather and some spooky goings-on in general did not make for a productive first few weeks. Strange things were allegedly happening to machinery and recordings done at night, resulting in some band members and crew resorting to seances. Apparently they managed to contact the demon, Baal, who promised chaos and mayhem…resulting in a strange mention on the rear sleeve of the finished album: “No thanks to Baal”.

Blackmore resorted to his typical pranks and practical jokes, particularly on Carey again, who isolated himself in his room until he needed to record his keyboard parts. Bain didn’t last long and was replaced by new bassist Mark Clarke. But Blackmore quickly decided Clarke was not up to the job and wiped his basslines, rerecording some of them himself. Another bassist was sought, and after auditioning over 40 candidates, Bob Daisley was offered the role. Carey was eventually fired again, and David Stone brought in as replacement, although Carey would claim nearly all the keyboard parts he recorded survived onto the final album.

The album opens with the title track, ‘Long Live Rock ‘n’ Roll’ and it’s a good anthemic rocker without a doubt, but it’s not really the sentiment or quality we’d come to expect from Rainbow. It’s a little banal and mundane really, but then maybe we shouldn’t expect dungeons, dragons and wizards all the time…?

Whereas ‘Lady Of The Lake’ hits the bullseye in every respect. Great backing track with a superb arrangement and fabulously structured lyric and vocal melody topped off with an atmospheric slide guitar solo from Blackmore. Soundwise, though, and I believe this applies to the whole album, it’s not got the depth, atmosphere or ambience of ‘Rainbow Rising’ and sounds slightly flat or dull overall.

A heavily treated lead guitar features prominently as the intro and dominant riff throughout ‘LA Connection’. The vocals again sound a little ‘under-produced’ in my opinion, almost demo-like in quality. It’s a solid performance from Dio but once again, the subject matter seems a little beneath Dio. Allegedly the song was written to illustrate Carey’s final departure from Rainbow although he disputed this in later interviews.

‘Gates Of Babylon’ is another top notch performance in every respect. A complex middle-eastern sounding chord progression and a superb vocal and lyric from Dio. If only the production was a little brighter…to compensate for this though is one of Blackmore’s most innovative guitar solos which is a flawless example in structure and composition, going through who knows how many key changes! Cozy Powell’s drumming, too, is stunning on this track…but given he’d supposedly picked the venue for its drum sound, the drums sound quite flat and lost in the mix unfortunately.

‘Kill The King’ opens side 2 and despite sounding slightly speeded up to these ears (Dio’s voice sounds higher pitched than on all previous/subsequent recordings to me) is a rollicking powerhouse of a track, living up to the potential first demonstrated on the live album ‘Rainbow On Stage’. Incredible drumming from Powell, who shared a songwriting credit on this track, the first original Rainbow song to be written by anyone other than the Blackmore Dio partnership. Jimmy Bain also claimed to have had a part in the songwriting of this song and but for ‘leaving’ the band for a second time would have earned a credit on the album, in his opinion.

A superbly flanged, echo-drenched guitar introduction to ‘The Shed (Subtle)’ launches a very heavy riff laden song. The subject matter is another track that doesn’t quite live up to the quality of previous offerings, whilst the title itself is nothing short of bizarre. Dio claiming that it had something to do with where the hardcore Chelsea FC football fans stood at Stamford Bridge…very odd.

‘Sensitive To Light’ is a song that is another straightforward (almost) 12 bar rock/blues song akin to ‘Do You Close Your Eyes’ that seems out of place on a Rainbow album. Whilst the lyric is an interesting perspective on the rock ‘n’ roll lifestyle of ‘living at night, sleeping/travelling by day’, it feels a bit throwaway to me and enters the category of ‘filler’ in my opinion.

‘Rainbow Eyes’ is the first Rainbow ballad since ‘Catch The Rainbow’ in 1975 (could we get any more Rainbows in that sentence…?!). A hint of ‘Hey Joe’ in the intro, but a beautiful song none the less, perfect vocal and harmonies from Dio, sublime guitar from Blackmore. But this would amazingly be the swan song for Dio within Rainbow. Blackmore felt that Dio had ‘ruined’ the song with his ‘high pitched, girly sounding voice’…!

After all the numerous ‘demonic’ interference during recording, the various personnel changes during the several months in France, the album was released in March 1978. It would be the last Dio/Blackmore collaboration.

The inner gatefold features a live photo from a Rush concert…the original wording on the banner has been retouched out to feature the slogan ‘Long Live Rock ‘n’ Roll’. Any Rush logos on t-shirts have also been conveniently removed so as not to spoil the overall impression.

The lyric insert is only available with the very 1st issue. 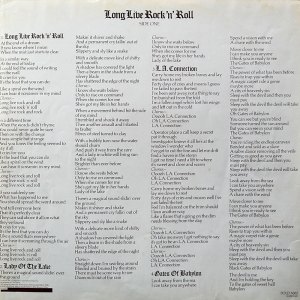